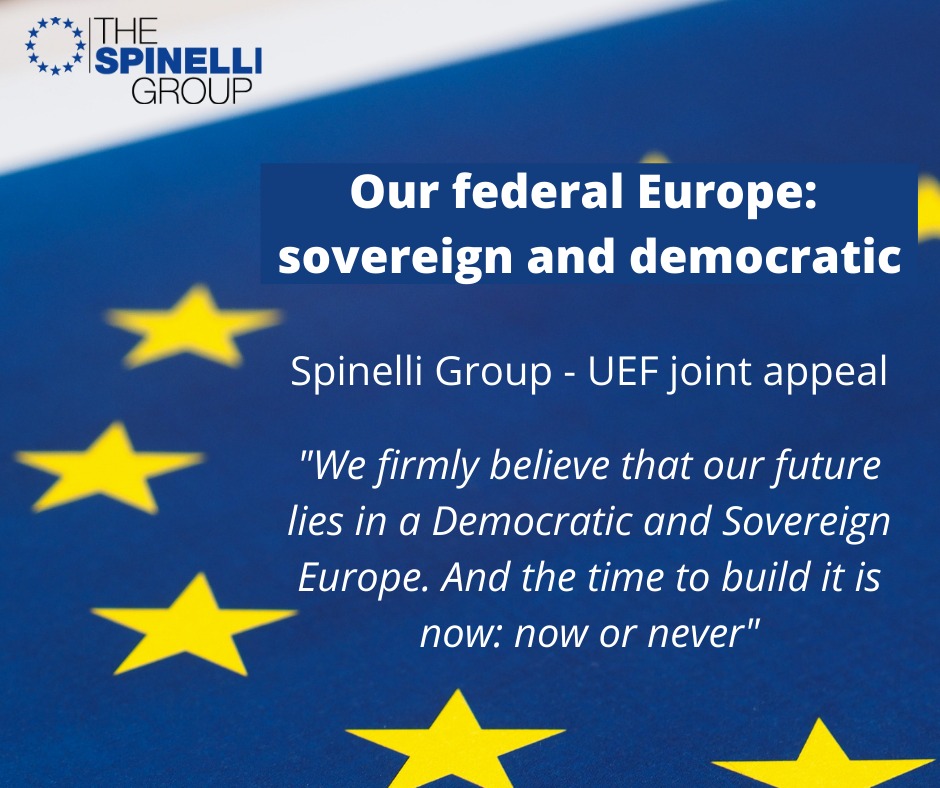 On Europe Day, and with the official launch of the Conference on the Future of Europe, the Spinelli Group together with the UEF is relaunching an important appeal aiming at bringing civil society into the heart of the Conference to debate on the more relevant aspects of the EU in a way that will complete the building of a federal Europe. More than 450 European personalities from all around Europe and sectors have already signed the Appeal.

Our federal Europe: sovereign and democratic

At watershed moments in history, communities need to adapt their institutions to avoid sliding into irreversible decline, thus equipping themselves to govern new circumstances. After the end of the Cold War, the European Union, with the creation of the monetary Union, took a first crucial step towards adapting its institutions; but it was unable to agree on a true fiscal and social policy for the Euro. Later, the Lisbon Treaty strengthened the legislative role of the European Parliament, but again failed to create a strong economic and political Union in order to complete the Euro.

Resulting from that, the EU was not equipped to react effectively to the first major challenges and crises of the XXI century: the financial crash of 2008, the migration flows of 2015- 2016, the rise of national populism, and the 2016 Brexit referendum. This failure also resulted in a strengthening of the role of national governments — as shown, for example, by the current excessive concentration of power within the European Council, whose actions are blocked by opposing national vetoes —, and in the EU’s chronic inability to develop a common foreign policy capable of promoting Europe’s common strategic interests.

Now, however, the tune has changed. In the face of an unprecedented public health crisis and the corresponding collapse of its economies, Europe has reacted with unity and resolve, indicating the way forward for the future of European integration: it laid the foundations by starting with an unprecedented common vaccination strategy, for a “Europe of Health”, and unveiled a recovery plan which will be financed by shared borrowing and repaid by revenue from new EU taxes levied on the digital and financial giants and on polluting industries. This federal plan constitutes a major leap towards the creation of a financial and fiscal Union capable of asserting European sovereignty both domestically and abroad, and as such, it needs to become permanent.

Now, as European citizens, we are eagerly awaiting the start of the Conference on the future of Europe, an event designed to bring together citizens, leading exponents of civil society, NGOs, trade unions, and representatives of national and European institutions, to debate and decide how to go about adapting our institutions in a way that will complete the building of our federal Europe. Their efforts must be underpinned by the clear realisation that the fundamental decisions on common borrowing and taxation cannot indefinitely remain in the hands of national governments alone, but must be made together in an effective, transparent and democratic way.

Today, we therefore need and want a strong, legitimate, and properly financed political Union that can tackle the great transnational challenges of our time, acting decisively in a wide range of policy areas, from climate change, growing social inequalities, health and migration to foreign affairs and defence. Moreover, we are calling for stronger pan-European democracy — real European political parties and movements and proper campaigns for European elections, based on the creation of a pan-European constituency and transnational electoral lists headed by the candidates for President of the European Commission.

We are striving for a Union that is both a community of destiny and values, and a model for the new world now taking shape – an example of how countries can live in peace together, build cross-border and social solidarity, and protect human rights, the rule of law, and fundamental freedoms.

We firmly believe that our future lies in a Democratic and Sovereign Europe. And the time to build it is now: now or never. Let us not waste this opportunity.

President of the Union of European Federalists (UEF)

and Member of the European Parliament (Renew Europe)

President of the Spinelli Group

and Member of the European Parliament (Socialists & Democrats – S&D)

and Member of the European Parliament (European People’s Party – EPP)

Vice-President of the EPP Group in the European Parliament

Former Member of the European Commission, EPP spokesperson in the Committee on

Constitutional Affairs in the European Parliament

Vice-President of the Europa-Union Deutschland (EUD), Vice-Chair of the Committee on Constitutional Affairs in the European Parliament

Member of the European Parliament (Greens/EFA) and

Vice-President of the European Parliament (The Left – GUE/NGL)

*This appeal has been published in the following media and daily newspapers: El Mundo, La Croix, EU News, Euractiv Italia and La Stampa.